About Sarajevo School of Science and Technology

Sarajevo School of Science and Technology is a private university located in the city of Sarajevo. It consists of 6 departments, 1 academy and a medical school. SSST is ranked as one of the top 600 universities in the world and among the best universities in Southeastern Europe. The medical school at SSST offers medicine, dentistry and pharmacy courses entirely taught in English.

Sarajevo is the capital and largest city in Bosnia and Herzegovina. Its population is over 270,000 inhabitants. The city’s roots date back to the 15th century and it keeps many traditions up to now. Sarajevo is famous for placing culture at the top of its strategies for development.

The Medicine course here takes 6 years to complete. It combines theoretical lectures, in the beginning, followed by practical training where you will use all your knowledge from the first years. SSST has provided the best laboratories with the most modern equipment and software for medical practice that cannot be found in every medical school around the world. This places it as one of the most preferable European universities.

For excellent education and proper use of the technology, Sarajevo School of Science and Technology hires well-known international professors who have deep medical knowledge and excellent teaching skills. Pharmacy is studied for 5 years and dentistry is 6 years in the best educational conditions.

Student transfers are allowed here. Students enrolled in a medical degree programme can transfer to SSST no later than the third year of their study. Pharmacy and Dentistry can transfer only in the first and second year.

Contact us for FREE to learn more about your options to study medicine in Bosnia and Herzegovina.

The tuition fees at University SSST are as follows:

Sarajevo is a city that gives many accommodation and entertainment options. You can choose between living in a crowded area or a small and calm area. Living in the centre will cost you around €250 per month for a 1-bedroom apartment. A flat outside the centre costs on average €170.

You will need €250 for utilities and food per month. Expenses for entertainment are all up to your preferences, but around €150 is enough.

Sarajevo School of Science and Technology is listed in the World Directory of Medical Schools and is recognised by the World Health Organisation. SSST meets all the GMC requirements, which means graduates are allowed to practise in the UK.

A diploma issued by this school is recognised all around the world so there will be no limits for you on where to start your professional career as a doctor.

The second semester starts at the beginning of March and ends in mid-June, followed by a 2-week examination period.

Living & Studying In Sarajevo School of Science and Technology

Where is Sarajevo School Of Science And Technology?

The university is in Sarajevo, Bosnia and Herzegovina. The city is situated along the Miljacka River in the Dinaric Alps. The school’s address is Hrasnička cesta 3a, Ilidža 71210, Bosnia & Herzegovina.

Can you transfer to Sarajevo School Of Science And Technology?

Can you study graduate entry medicine at Sarajevo School Of Science And Technology?

How much do tuition fees cost at Sarajevo School Of Science And Technology?

Where is Sarajevo School Of Science And Technology recognised?

Can you study medicine in English at Sarajevo School Of Science And Technology?

The semester starts on the 5th of October.

When is the application deadline at Sarajevo School Of Science And Technology?

The application deadline is on the 16th of September.

Other Universities In Bosnia & Herzegovina

Most students struggle to get accepted into medical university. We are doctors who help you secure entry into top accredited European universities, so you can study medicine, then successfully return back home to work as a doctor.
Menu
UniversitiesServicesBlogAffiliate
Courses
MedicineDentistryPharmacyPre-MedicalOnline
Company
TeamContact Us
AboutTermsCompany Profile
Others
WebinarsCompany
Brochure
Refund PolicyPrivacyJobs
UK Company Number 09993343.
MedlinkStudents™ has British Council Certified Agents, and its trademark is registered with the UK Government.

Your data is safe. You can request deletion anytime. 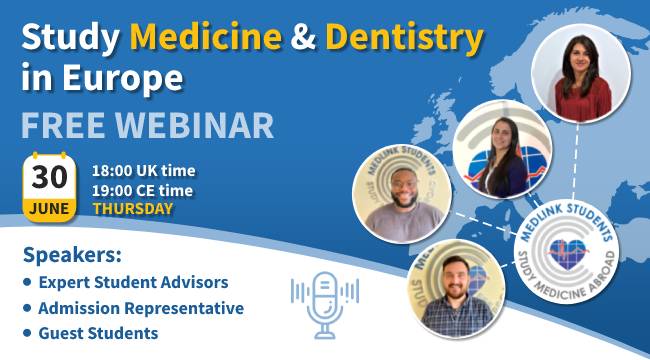